Maha Devi Sarasvati, Mother of us all

Devi, Devi, Spun the space between the stars

Devi in the Ocean’s roaring waves,

Sarasvati in the waters’ cool embrace

Builds the mountains, grinds them down

Painting dark spots on Her moon

Pictures of Benzaiten’s shrine in Inokashira Park, near Tokyo (also within walking distance of the Ghibli Museum). Enjoy!

The shrine also had a little worship hall for Kannon (The Japanese version of Quan Yin. It should be pointed out that Kannon is only rarely conceived of as female; The Chinese gendering of the Indian boddhisattva as such by default was unique to them, and did not occur until the 12th century)

The shrine also has a website. Despite the Japanese that shows up on the browser tab, this is the link to the English-language page.

The Heavenly Maiden legend from Japan is similar to Selkie and Mermaid lore in Britain, and Swan Maiden lore in Europe.

Many people across Japan are familiar with the basics of the tennyo (heavenly maiden) legend, and there are a lot of fun ways to read into it, and compare or combine it with the legend of the star-crossed lovers–including another heavenly maiden–who meet on Tanabata. Although commercially celebrated on July 7, the celestial activity it actually celebrates was on August 2 this year. Next year (2015), it will be on August 20.

This particular version of a well-known legend takes place in Kurayoshi, Tottori Prefecture. The kids of Kurayoshi still keep the associated drum and flute traditional alive, as you can see on their blog. 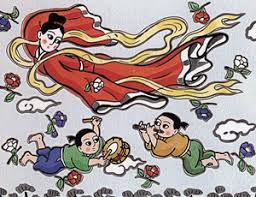 A very, very long time ago, in the land of Hoki, a young woodcutter was going about his usual work when he discovered something hanging on a boulder which he had never seen before. It was a beautiful, pure white…

Let me get this off my chest right away: I really wanted Sarasvati’s name to have a pretty meaning. I was dead set on it meaning “The Flowing One,” because…well, that fits in so perfectly with how I experience her. She is a goddess of things that flow: water, fortune, inspiration, ideas, communication. You name it. She rules the tides of my heart. (And yes, I’m aware of how sappy that sounds. Deal.)

Contemporary Hindu sources, give the etymology of her name as “Sara” and “Sva,” that is, the knowledge of one’s self or essence. A very pretty explanation too, but not one I find useful, as I am already far too prone to self-absorbed navel-gazing. I’d make a very good Pythia, as I “know myself” perhaps a little too well.

What does Sarasvati’s name actually mean, though? For a start, Herself was originally the genius loci of the mysterious Sarasvati River in Ancient India. She was a Vedic deity, and as such, was not anthropomorphized except as poetically necessary. She was the river, spoken of as gushing in mighty torrents that broke the peaks of mountains. In the Rig Veda one is more likely to hear talk of Sarasvati’s roaring waters than anything else. She was not conceived of as a beautiful goddess, but as the awesome waters of the river.

The meaning of Sarasvati’s name is thus the meaning of the river’s name. In an unusually richly cited and clearly reliable article, Wikipedia details the etymology of the River’s name. In the proto-Indo-Iranian languages of Ancient India and the Near East, *sáras-va-tī meant “marshy” or “full of pools.” In later Sanskrit, the masculine sáras meant “pool” or “pond,” while the feminine sárasī meant specifically a stagnant pool or a swamp. A connection with the Sanskrit *sar-, or “flow, to run” is specifically singled out as being unlikely. Thus, the river’s name was likely a description of the terrain of the area: marshy, a swamp, full of stagnant pools.

But here we come to the distinction I posited in the title of this post: Objective Fact and Subjective Truth.

The facts are that Sarasvati’s name means “marshy, full of pools,” and refers to her origins as the genius loci of the Sarasvati River. One cannot dispute that her name did not originally mean “knowledge of self” or “the flowing one.” That was simply not what it meant in Vedic times. The Sarasvati River was not named for either of those things, and thus, neither was my goddess. Those are the plain, bone dry facts.

However, facts are in the domain of rationality and measurable, verifiable experience. Once you leave the realm of objectively verifiable, materialistic facts that are required in the social and natural sciences (and to a lesser extent, in the humanities), you stumble into experiences that simply require a different framework for evaluation. There is a reason that individual, mystical experiences have their own acronym in the Pagan community (UPG – unverified/unverifiable personal gnosis). The sublime and the numinous comes to each person differently, if it comes at all.

In fact, the experience of the sublime is usually considered to be unique to the individual, simply as a given. This is why, in the pagan community, SPG (Shared Personal Gnosis, also called PCPG, or Peer-Corroborated Personal Gnosis) is often such an incredibly validating experience. For example, I stumbled across a poster on a Pagan forum who worked with Sarasvati. This person claimed that Herself had a thing for being surrounded by crystals. I promptly freaked out, as this is something I could verify in my own personal experience with Her: Sarasvati loves crystals and stones.

So what does this have to do with the meaning of the name “Sarasvati?” Well, it all comes down to the idea of there being a concept of subjective Truth, as well as the more ordinary, rational truth (with a lowercase-t) shown to us by facts. Myth is often held up as an example of Truth rather than truth. The ancient stories of deities reveal Truth (with an uppercase-T) about Them that the academic texts do not. To a Hellene, the objective reality of Greek myths is irrelevant, because the myths speak to the sublime. They reveal reality on a different level than the material.

So let’s consider the etymologies again. Factually, objectively, historically, Sarasvati means “marshy, full of pools” and indicates the swampy terrain of the river. But the goddess is more than just what the river was, and for those who seek self-discovery with her, the Truth (uppercase-T!) is that her name means “knowledge of self.” For someone like me, the Truth – the reality revealed to me by my own experiences with the sublime – is that Sarasvati’s name means “the flowing one.”

So may your god bless you, whichever one that is.

Many societies all across the globe have held women to difficult moral and sexual standards. Even though Heian Japan was, by all accounts, not a bad place for a woman historically speaking, it was still not easy. Even though adultery was not a crime for women (unlike in Christian and Muslim countries, or in China), and women in the lower echelons of aristocratic society were remarkably unrestricted in their choice of sexual partners (take as many as you want!), “respectability” still meant a monogamous attachment to a husband. Yet unlike in Christian Europe, the husband was not supposed to be monogamous in return. “Respectability” usually also meant a very confined life, away from the heart of society. It’s perhaps no wonder that the women who seem to have been having all the fun were the gentlewomen, who were seen as a sort of necessary evil by the aristocrats. Yet even the gentlewomen were held to standards, and they faced consequences for violating them.

Heian Japan has been characterized as a sort of free-love paradise, often based solely on Ivan Morris’s work The World of The Shining Prince, which relied solely on romantic literature to paint its picture of sexual mores.(1) Try to construct a similar picture of American sexual norms from romance novels, and you will understand just how misleading Professor Morris’s picture was.

Yet even reading some of the sources that Morris himself used, one can clearly see that there were consequences for improper sexual behavior. Morris heavily relied on The Tale of Genji, which chronicles the rampant couplings of its eponymous hero, and later his (supposed) son and grandson. Yet even in this work, women face deep shame and social stigma for their perceived transgressions, and most of all, they are consumed by guilt at having given into what they perceive as inappropriate desires. Poor Ukifune tries to commit suicide after being seduced by her lover’s best friend. Fujitsubo is so ridden by gossip and rumor regarding her relationship with Genji that she becomes a nun. Both these women transgressed. Both faced consequences.(2)

Some might still point to the gentlewomen, those free spirits, as being totally liberated and independent. Yet this is not really true. Sei Shōnagon certainly wasn’t free to hook up with just anyone, as a famous episode from Makura no Sōshi demonstrates:

I heard people saying there’d been a man in the Long Room who had no business being there.  He’d been seen emerging at first light and going off with his umbrella up. As I listened, it dawned on me that the rumours were actually about me. Well, he may not be a senior courtier, I thought to myself, but he’s not someone who should be so simply dismissed after all. (3)

When it is said that Sei’s lover “had no business” in the Long Room, there are deeper implications than simply “what is he doing here at this hour?” Only certain, privileged individuals were allowed to enter the Emperor’s residence hall (the Seiryōden). This man clearly was not one of those individuals. No one would have questioned the presence of a senior courtier, at any time of the day or night, as aristocrats were often made to live in the palace, and certainly many would be called at odd hours.

This man, however, was not a senior aristocrat. He was not one of the “in-group.” No one had a problem with Sei’s other lovers, who were very important men. Who was going to tell Fujiwara no Tadanobu, the head of the Empress’s household, that he couldn’t sleep with a gentlewoman? Who was going to tell Fujiwara no Yukinari, another important man, that he couldn’t have a lover? Senior courtiers were allowed to sleep with the gentlewomen, and it didn’t matter how many of them were sleeping with any one lady. Should a gentlewoman decide to pick someone closer to her own socioeconomic status however…that was a problem. Can’t have the servants sleeping with just anyone.

My first two posts were beautiful essays on Heian Japan. I slaved over them. Wrote them as carefully cited, polished pieces that I would’ve been proud to turn into a professor. I thought they were impeccable blog posts.

My third post was a more chatty, snarky take on the subject. Jackpot! Someone is following me now. (Thank you, San’in Monogatari! You’re awesome.)

Then I decide to word-vomit some stuff about my spirituality, and put up a couple of poems. WTF??? Suddenly this blogging stuff is happening. (Thank you, by the way, to everyone who has liked and followed my blog. Trust me. I appreciate it, despite my snark here.)

I need to stop trying so hard…

When the house is cool and dark

When the light through the shades is still watery, weak

When darkness pulls back from the land like a lover

Reluctant to leave the warm embrace of her beloved

Soft and slow, taking its own sweet time

Dawn begins its careful ascent above the tops of the mountains

Peaks long since rounded and softened with the weariness of age

Trees catching the golden light one leaf at a time

You are the scalding coffee and the sizzle of bacon

The bright sunshiney eggs and the tiny furry head

Belonging to the not so tiny dog (not…

Flight of the Hamsa
Blog at WordPress.com.